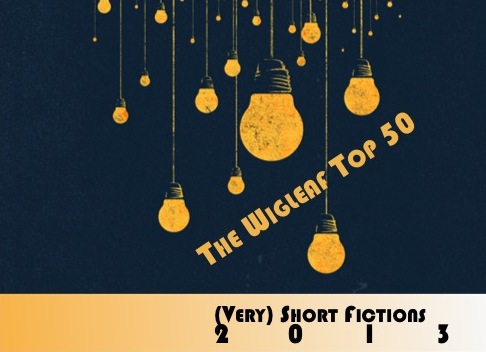 I just found out via the ever wonderful and supportive NANO Fiction that “Mars” was selected for the Wigleaf Top 50. From a longlist of 200 short short stories, Wigleaf and a selecting editor sifted out their favorite 50 stories from 2012. “Mars” is on that list.

I started reading Wigleaf back in the winter of 2011. I’d recently moved to Austin, TX, and was interning at American Short Fiction, where Callie Collins and Jill Meyers (now of A Strange Object) introduced me to a thousand great sources of new fiction, including Wigleaf. Wigleaf was my introduction to contemporary microfiction, and it’s what sparked my interest in experimenting with very, very short stories.

I’m pleasantly stunned that my story about Mars and not-Mars is included on this list. Many thanks to Wigleaf, to selecting editor Danielle Evans, and to NANO Fiction for taking a chance on this piece in the first place.

Now, if you’ll excuse me, I have 49 other great stories to read.

You may have heard that the Curiosity has landed on Mars. It is doing science and taking beautiful pictures for us. Pour one out for our intrepid rover, won’t you?

In a strangely topical turn of events, a piece of microfiction I’ve been sending out called “Mars” has just been selected for publication by NANO Fiction. This will be my first print publication. I’m looking forward to seeing bits of paper with my words on them.

“Mars”, as you might expect, is about Mars. It is also about other things. I’ll post a proper process post about it when it shows up in NANO. It is short, and easily spoiled if I talk too much about it.

I’ve spent much of the past year fretting about my textual voice. I often feel like my writing occupies an odd badlands. Too wordy for the genre publications, too weird for the lit journals. (Which may be why I like working for Unstuck  so much.) I’ve been pushing myself back and forth across the lines recently, trying to write literary realism and science fictional adventure yarns. Ultimately, though, the stories that get picked up are the ones that come straight from those liminal badlands. I write quiet fictions about unquiet things. I don’t think I’ll be stopping anytime soon.

One day I am going to personally flay whatever hellish bureaucrat stuck me with you.

Oh, yes.  More filing.  Lovely.  Maybe next we can answer some phones.  Did you know your phone voice is different from your real voice?  Phony.  Phone-y.  When you were a child you wanted to be a paleontologist.  You should be ashamed of yourself.

That, at least, would be interesting.

This is the first prompt I was completely stumped by. I kind of wanted to make this piece be from the point of view of Crippling Self-Doubt Demon or Baseless Social Anxiety Demon or one of my many other neuroses.  But literally all I did yesterday was answer phones, come home, drink a beer, watch the second half of The Two Towers, and go to sleep.  I am tired.  Sorry, personal demons.

After my nosferatu hatched, I hand fed it on drops of blood from my finger until it imprinted on me.  When it became old enough to leave its nesting box, it would follow me around the house and peep for my attention.  I named it Cornelius.

Now Cornelius eats beef blood and butcher scraps, but he still sticks to me like a shadow.  He likes to lay his head on my lap with his chin pressed to backs of his long, clawed hands while I watch television on the couch.  I stroke his bald head and scratch his leathery ears.  Cornelius seems to like nature shows the best.  I think it’s because the animals on the screen all look small enough to eat.

My apartment is completely free of mice.

Yes, Nosferatu is supposed to be uncapitalized in this piece.

The masks were magic, my brother said.

The masks let us scavenge above ground for food and other supplies while others choked and died in the war air.  There were too many civilians down in the shelters and the war was lasting too long.  Uncontaminated food was hard to come by.  My brother told me that people would start starving soon.

But not us, he said.

The masks were soldier masks, heavy and plated and triple filtered.  When we put them on our shoulders our heads looked too big for our bodies.  The first time I saw my brother in his mask, I thought a soldier had come into our shelter and I screamed until he took it off.

Did you get the masks from a solider, I asked.

No, said my brother.

I really need to write more stories about siblings.

FFFTTD Day 2: “Write a story where the first line is the first sentence of the last email you received.”

Thank you for participating in the Texas Gas Service Paperless Billing program.

Sure, we have a governor who’s about as intelligent as a stegosaurus. Well, maybe not quite a stegosaurus.  What’s that sort of extra, smaller brain some dinosaurs had in their butts? Buttbrain is definitely not the scientific term.  Hindbrain. Our governor is basically equivalent to a stegosaurus hindbrain covered in helmet hair.

Okay, and he may have had multiple meltdowns during the presidential debates. And he thinks the American revolution happened in the 16th century.  And we elected him.

So, yeah, our state is pretty much a walking punchline right now.

But, you know what? The Texas Gas Service gives a fuck. We give a fuck about trees.  And so, apparently, do you.

Once again, thank you for participating in the Texas Gas Service Paperless Billing program.

I was very tempted to make this the first line of the last personal e-mail I received, because then I could have worked with this: “Thought you might appreciate this: honest-to-goodness real-retro-futuristic footage of the launch of the  U.S. response to Sputnik.”

Instead, I had to use the first line of my gas bill.

Tara – “An Announcement From Your CEO”

Christian – “The Body Mathematica… and Pi”

Here’s a story.  Laika was a stray like Sharik.  She lived in Moscow.  The program used street dogs because they thought the dogs would already know how to be cold like space is cold.  Laika was a mongrel.  She was part terrier.  Her other names were Kudryavka, Zhuchka, and Limonchik.  The American press called her Muttnik.

The other two dogs were Albina and Mushka.  One of them flew in a rocket but neither of them went to space.  Gazenko put Laika in a centrifuge and fed her high-energy gel.  The dogs were trained to live in smaller and smaller cages because in space they wouldn’t be able to move at all.

There are three stories about what happened to Laika.

First she died when the oxygen ran out, or when she was euthanized with a serving of poisoned food.

Second she died on the fourth day when the cabin overheated.

Third she died five to seven hours into flight from overheating and stress.

On April 14, 1958, her body and her ship disintegrated as it fell through the atmosphere.

There is a statue to Laika in Star City.  Star City is a real place.  They train cosmonauts there.  It feels good to say, “Laika is in Star City now.”

Gazenko said, “The more time passes, the more I’m sorry about it. We shouldn’t have done it… We did not learn enough from this mission to justify the death of the dog.”

No one cares about space anymore.  Laika, you were supposed to be important.

Better late than never.  Included in my thesis collection were two thematic vignettes.  One of them was what you just read.  The other is called “Lake Monsters of North America”.  I think this is the better of the two.  The overarching theme of my thesis collection was what I called “the disappointing fantastic”.  I wanted to take unusual or fantastic situations and take them apart until they were at least a little sad.  One of the inspirations for this feeling was the Cold War, particularly the technological race between the U.S. and the U.S.S.R.  The space race in particular seemed to embody a scientific optimism that ultimately didn’t take us very far at all.  Given my age, I experienced the Cold War only in retrospect: in history, media, and propaganda.  The way I perceive it might as well be the same as how I perceive fiction.  I was also interested in history as narrative, an ongoing body of work that is constantly edited and revived as new narratives replace old ones.  The goal of this vignette was to take historical facts and fictionalize/emotionalize them.

Obviously, if you haven’t already, you should read Nick Abadzis’ Laika.  It does exactly what I’m talking about.

I’ve been slow about posting my thesis stories because I’m not entirely happy with how some of them turned out.  I was pleased with the project as a whole, but there are definitely some clunkers in there.   I’m tempted to just post my favorites and leave out the mediocre ones. I think posting it in its entirety, though, may be helpful in exorcising it from my brain.  I’ve taken lots of notes this summer, but I  haven’t written a single full story.  Maybe when I put my thesis behind me I’ll be able to start fresh.