I quit smoking about six months ago.  I was on a health kick and it seemed counterproductive to keep smoking while I was practicing yoga and eating kale.  I still smoke socially from time to time.  Usually when I’m around other smokers and I’ve been drinking bourbon.  But I no longer smoke habitually throughout the day.  No more counting down the hours of work and class and library with cigarette breaks.  Instead I take walks or drink tea.

Lately, though, I’ve been under a constant, boring amount of stress.  “Boring” not in the way that means “uninteresting” but boring as in something that slowly drills away at you.  And I’ve begun to miss that easy way of counting down time.

I’d prefer not to start smoking again, so I’m trying to find a way to remind myself why I quit.  Hence this project, an “action painting” for my Visual Concepts class.  It is called Too Much of a Good Thing.  The idea is to sit in one place for an hour, smoke very rapidly and consciously, and try to become disgusted with it and/or myself.

The materials are as follows: a large sheet of white drawing paper, a pack of cigarettes, a travel mug full of Paradox coffee, time.

It’s drizzling, but that probably makes me less of a fire hazard.  I spread out the paper and sit cross-legged on the damp concrete behind the art building.  The paper is in front of me like a place mat.

Cigarette 1: Nice view. I observe a squirrel and what might be a woodpecker.  I’m not quite sure what to do with the cigarette.  Should I intentionally burn the paper?  I lay the cigarette on its side on the paper, but it rolls around and doesn’t seem to catch anything on fire.  I just smoke it instead.  I stub it out on the paper when I’m done.

Cigarette 2: It stops drizzling.  I think about how the white paper reminds me of the counter of a diner.  The kind of diner where people routinely miss the ashtray and singe the linoleum.  I think about how you can’t smoke inside in most states now.  It’s something I’ve written about before.

Two down. I've gotten a little coffee on the paper, too.

Between cigarettes 2 and 3, Sean comes outside to eat honey roasted peanuts.  We talk about art and the sorts of things that you find in the basements of rental homes.  I tell him about the diners, and about how it’s mostly illegal to smoke indoors these days.  He reminds me that I’m smoking illegally close to the art building.  Good point. 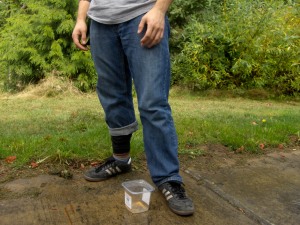 I probably should have tried for a better photo.

Cigarette 3: Mouth tastes like ashes.  I take a break to drink coffee. 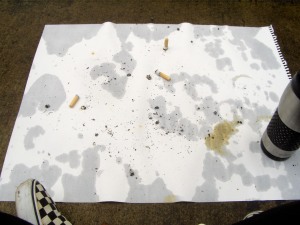 The remains of number 3.

Cigarette 4: I dread it before I even light it.  Feeling a little sick.  Don’t think I’ll make it past 5.

It rests on the paper and burns while I write this.

What I thought was a woodpecker is actually a blue jay.

Cigarette 5: I’ve got my second wind, but I still feel pretty sick.  The cigarette takes forever.  I finish the coffee.  Little birds seem to like the pine tree in front of me.  There are a lot of them.

When I finish, the paper looks a little like the surface of the moon.  If people stubbed cigarettes out on the moon, I guess.  Two stubs stand up, three lie on their sides. 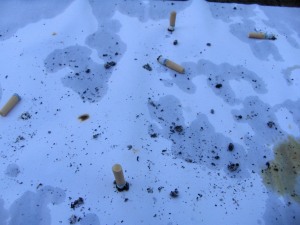 Cigarette Other: While I’m taking pictures of the final result, Clara comes over and asks about my project.  Then we talk about gendered magazines, DIY culture, and whether or not what I’m doing is performance art.  I didn’t really intend to be looked at.  I think this more experiential than performance art.

She asks for a cigarette and I’m happy to oblige. 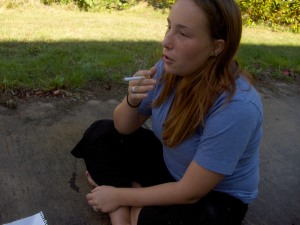 While she smokes, she practices singing the paper. 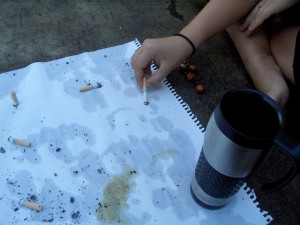 Cigarette burns and coffee stains are pretty much exactly the same color.

Clara is making a painting out of materials she collected in the canyon.  She takes some ash from the paper and mixes it with crushed rose hips.  I think about the term “cross-pollination”.  Afterward I take a picture of the new cigarette landscape.

Afterward I go inside and lay the paper flat so that it will dry correctly.  I read David Foster Wallace’s short story “My Appearance” while I wait.  My hands shake and my stomach feels like a nest of garter snakes.  I feel pretty disgusting, but also like I’ve successfully forced myself through some sort of aversion therapy.  I have no desire for any more cigarettes.  If anything, I have anti-desire.

Drying on the board, the paper looks a lot less interesting than I thought it would.